If you’re following me on Instagram or if you’re a real life friend then you already know that I’m a foodie.

I like cooking, experimenting with different things in my kitchen and obviously go on culinary adventures locally or wherever I’m travelling.

I’m a strong believer that cuisine is a great way to get to know a Nation and its culture. It’s an important part of the whole travel experience for me.

END_OF_DOCUMENT_TOKEN_TO_BE_REPLACED

If I have one advice to give you prior to your trip to Georgia (the country not the state ) that would be : EAT ALL THINGS PURI.

Puri პური is Georgian bread and there are few varieties of it for you to try.

The first one I tried was the ADJARULI KHACHAPURI which is a cheese-filled bread topped with a raw egg and some butter (Don’t look at me like this, I did not invent it). You need to mix the egg and butter with the cheese to finish cooking it and then use the crust to eat the mixture.

As much as enjoyed that, I couldn’t finish it. It was a bit too much for me. 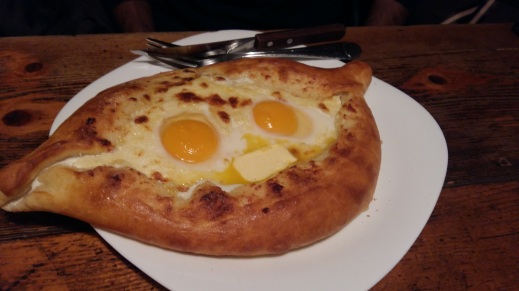 I also tried KHACHAPURI few times which is the above bread minus the egg, it’s a cheese-filled soft bread.

Apparently Georgians prefer it to pizza and I kinda agree.

BTW, the cheese used to make all this heavenly yummy puri is called sulguni.

As if this wasn’t enough bread, they also have puri filled with beans, it is called Lobiani. Lobiani comes from the Georgian word Lobio which mean beans. Funny enough, in my native dialect, that is Tunisian, we call beans “Lobia”. Not sure how we got almost the exact same word  as the Georgian one, maybe the Ottomans introduced it to both countries?

Talking about beans, Lobio is also another tasty dish to try while in Georgia. You may be used to have beans part of your breakfast but in Georgia, it’s served as a savoury main meal and it’s very tasty.

Another thing to definitely try is Khinkali. Khinkali is Georgian dumpling that comes with a variety of fillings. You can have the classic mince meat filled Khinkali or cheese, potatoes or mushroom ones.

My absolute favourite dish, and this is because I didn’t expect it to be that good, was Badrijani Nigvzit – ბადრიჯანი ნიგვზით (Eggplant Walnut Rolls) which is fried eggplant forming a roll pocket and filled with a delicious creamy filling made of walnuts, garlic and spices. 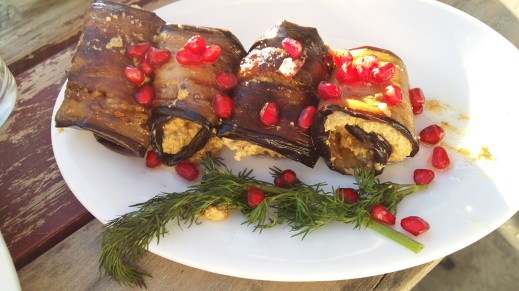 Not sure if having this dish on top of a hill looking at the beautiful city of Signagi and the caucasus mountains made it more delicious than how it really is ( sorry couldn’t stop myself from bragging).

Overall, the Georgian cuisine is really yummy. Even though I was eating in touristic areas, the food was authentic and delicious.